Breast is best, especially if you don't stress...

It looks like a bit of a ruckus was started over the entry: "Why you shouldn't buy, sell or borrow a secondhand Medela Swing Pump," posted on the Dispelling Breastfeeding Myths blog. The author took apart her Swing pump to show what looked like mold and dried milk inside. It is not the first blog entry of its kind that I have seen on the 'net. The blog entry was re-posted by well-intentioned women who run breastfeeding support sites and facebook pages. A lot of mothers were rightfully concerned. The majority of commenters said they wanted to stop using their Medela pumps.  There were also commenters who said Medela didn't care about anything but making money.

My comment on the facebook wall of The Leaky Boob was: "I think that post is overkill. My pump has been used in pumping for three babies over the course of 4 years. I honestly have never seen milk back up into the tubing (when I overflow, it goes onto my clothes). It's probably 'dirty' inside, anyway. I'm not going to freak out about the possiblity of particles blowing into my milk from inside the pump though. Me and my family are healthy and no one is immunocompromised. I just don't think it's worth getting that worked up about unless you are dealing with a sickly infant."  So far, over a dozen mothers have "liked" my comment, which is encouraging.

Despite my outward confidence, curiosity got the best of me.  Before I even had a chance to leave work for the day, I started to pull my breast pump apart. I just had to know...  Was there mold growing in my pump?  As stated in my comment above, my breast pump is over four years old and has been used to pump for three babies. I have a Medela Pump 'n Style. I couldn't find one on the Medela website for comparison, so I don't think they are made any longer. Still, for the benefit of any mothers out there who are still using one of these (and are quietly freaking out inside), I give you my photos: 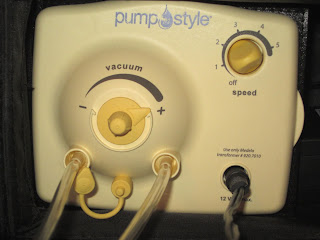 A photo of the front casing of my pump with tubing and power cord attached. 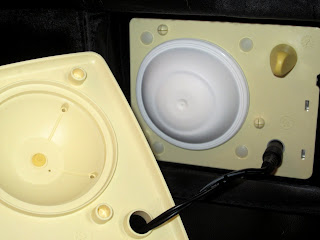 This is what the back of the cover plate looks like on the other side. Those tiny little holes are the other side of where the tubes attach. The round white rubber piece covers the pump mechanism inside. It's not waterproof around the edges and probably isn't airtight either, but doesn't seem easily penetrable. I didn't clean anything before I took these pictures. If you click to enlarge them, you will see that there were some fibers there. It looked like fabric fiber or maybe some dust, but no dried milk and certainly not any mold. 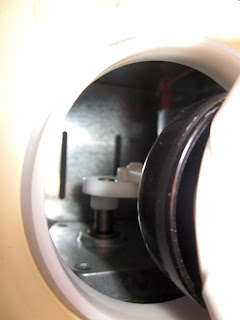 This is what the inside looks like behind the membrane on the left side. Nothing nasty there... 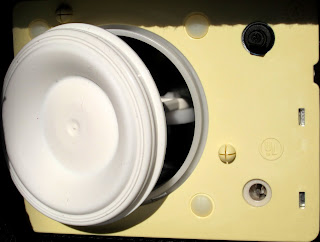 And the other side. Still nothing scary. 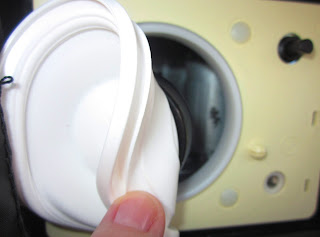 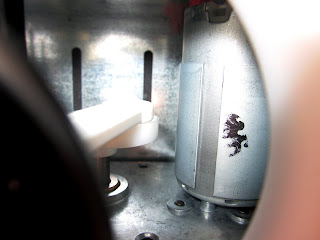 But it's probably just some lubricant or something. This is a machine with moving parts, after all.
The point is... it wasn't mold.
Getting the pump back together was interesting.  I had to use one of those key-cards you get from the grocery store to help me squeeze the lip of the rubber cover back into the groove it came out of. That gave me further reassurance that things weren't going to be going into or out of my pump very easily.
﻿
Here's a video of my pump in action (without the faceplate on). The rolling action of the diaphragm is what creates the suction. I went ahead and tested it on myself too, just to be sure I hadn't ruined it. It still works.
So, that's my filthy dirty four year old Medela pump. It may not perform as well as it once did, but it still gets the job done.  It's no monster.  I hope that helps dispell the myth that all open-system pumps are unsafe for repeated use. I just don't think it's true.
Posted by Just Fucking Great...ful at 6:55 PM

Maggie is a 39 year old married mother of four children from infant to teen age. She holds a Bachelor of Science in Nursing degree and is a Registered Nurse working full-time in General Surgery.